‘Somebody Needs To Go To Jail’ For Nursing Home Ordeal. Somebody Might.

“With multiple deaths, it calls into question everybody who works there and what did they know and when did they know it,” said Fort Lauderdale attorney Ken Padowitz, a former state prosecutor in Broward who has tried dozens of homicide cases.

“To have one person die is a serious situation,” he said. “To have multiple people die raises it to a whole different level because evidence can be presented to a jury to show there was a wanton, reckless and grossly careless disregard for these elderly patients.” 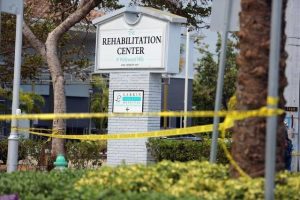 BY JAY WEAVER AND CARLI TEPROFF

When the rooms at a Hollywood nursing home became too hot to bear on Tuesday night, some of the elderly patients were rolled out in their beds and wheelchairs into the hallway on the second floor.

They were left there — some of them naked — a video shot by a resident’s daughter and viewed by the Miami Herald shows.

Eight residents would die by the following day.

Some of the surviving patients’ family members said Thursday they had no idea of the miserable conditions at the Rehabilitation Center at Hollywood Hills, which lost power during Hurricane Irma. They said they learned about the multiple deaths from news reports Wednesday morning.

Carmen Veroy’s 89-year-old parents, Libia and Gabriel Giraldo, survived the ordeal — but Veroy said she could not fathom the overheated conditions in the rehab center until her sister sent her a video of the hallway scene during a visit Tuesday night.

“Oh, my God,” Veroy told the Herald. “They were naked in the hallway.”

Others also were aghast.

“They should have called 911,” said Ray Nazario, a retired Miami-Dade homicide investigator whose 94-year-old mother-in-law, Rosa Cabrera, was among the patients left in the hallway. She, too, survived.

“The first thing they should have done is get these patients the hell out of there,” he said. “This is criminal negligence. Someone should go to jail for this.”

The Hollywood Police Department has opened a criminal investigation that could lead to manslaughter charges if the Broward state attorney’s office concludes that employees, administrators or the owner of the center acted with culpable negligence — “an utter disregard for the safety” of the deceased elderly patients. The business became affiliated with South Miami’s Larkin Community Hospital as part of bankruptcy sale in 2015.

“With multiple deaths, it calls into question everybody who works there and what did they know and when did they know it,” said Fort Lauderdale attorney Ken Padowitz, a former state prosecutor in Broward who has tried dozens of homicide cases.

“To have one person die is a serious situation,” he said. “To have multiple people die raises it to a whole different level because evidence can be presented to a jury to show there was a wanton, reckless and grossly careless disregard for these elderly patients.”

Under Florida law, those are the standards for proving culpable negligence in a manslaughter case, which can carry up to 30 years in prison.

The potential manslaughter case would also depend on what steps, if any, the rehab center’s employees and administrators took to address the lack of power at the facility and the risk the outage posed to the safety of its elderly patients.

“It is a close call and will hinge on what else the staff did or didn’t do once the conditions got worse,” said lawyer David Weinstein, a former state prosecutor in Miami-Dade. “It is similar to the analysis that would be used if a parent left their child in a hot car.”

Prominent Miami civil attorney Stuart Grossman, who specializes in medical malpractice cases, said the rehab center’s conduct isn’t just a failure to provide a standard of of care, or negligence. “It’s much worse than that,” he said.

“What makes this worse is that it happened in plain sight,” Grossman said. “I don’t understand why they didn’t call fire rescue or remove the patients while they were watching this medical emergency unfold before their very eyes.”

He said Wednesday the center was cooperating fully with investigators.

But the state Department of Health said regulators were never told that residents at the nursing home were in peril.

“At no time did the facility report that conditions had become dangerous or that the health and safety of their patients was at risk,” said Mara K. Gambineri, a Florida health department spokeswoman.

In fact, Gambineri said, the nursing home had made 17 reports to the state through an online database beginning Sept. 7. “Throughout the course of these reports, the facility never requested any assistance or reported the need for evacuations.”

On Wednesday night, the state Agency for Health Care Administration halted new admissions to the rehab center, which had a history of poor inspections by state regulators.

AHCA said that on Sunday — when the storm made landfall in Florida — the rehab center “became aware that its air conditioning equipment had ceased to operate effectively.” The nursing home contacted Florida Power & Light to report the problem, then set up eight portable air coolers throughout the facility, and placed fans in the hallways.

On Tuesday afternoon, the center reported to state regulators that it had power — and access to fans and spot coolers provided by Memorial Regional Hospital, which is located across the street.

First responders, “as a result of the heat in the building,” essentially ordered the home to evacuate its second floor. Administrators evacuated all 141 surviving residents from the building, transferring them to Memorial Regional and other area hospitals.

The Broward Medical Examiner’s office released the names of the dead Wednesday, but declined to state the cause of any of the deaths. They were: Carolyn Eatherly, 78; Miguel Antonio Franco, 92; Estella Hendricks, 71; Betty Hibbard, 84; Manuel Mario Mendieta, 96; Gail Nova, 71; Bobby Owens, 84; and Albertina Vega, 99.

To read the Article on Miami Herald CLICK HERE