“They still don’t know how she died,” said Padowitz. While the medical evidence does not entirely exclude strangling, Padowitz said the testimony of the prosecution’s medical expert agreed with his own — strangling was not likely. But other possibilities could also not be ruled out, Padowitz said. Marquinez could have had a heart attack or a stroke, he said. 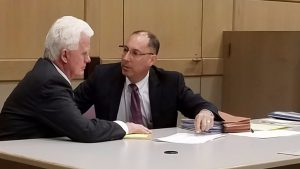 Richard Henry Patterson, the Margate man who initially claimed his girlfriend choked to death during oral sex, was found not guilty Monday of her murder.

The verdict was announced just under five hours after the jury began its deliberations.

Patterson, 65, faced a maximum of life in prison if convicted of the murder of Francisca Marquinez, 60, whose decomposing body was found in her condo unit Oct. 28, 2015, after Patterson reached out for help from a defense lawyer, Ken Padowitz, without calling police.

Padowitz and Patterson embraced after the verdict was read, as family members of the victim sat in unconcealed frustration. “This is not justice,” one family member called out. Marquinez’s son, Omar Andrade, declined to comment as he left the courtroom.

The defense claim that Marquinez choked to death while performing oral sex on Patterson was the focus of Padowitz’s approach through most of the weeklong trial, but late Friday the lawyer switched his emphasis to the possibility that Marquinez died of a heart attack or stroke that went unnoticed by the defendant.

Medical experts were not certain exactly how long Marquinez was dead. She was last seen by someone other than Patterson on Oct. 25, according to trial testimony, and by the time investigators arrived her face, neck and arms had been so badly discolored that if there were bruises, no autopsy would have detected them.

But her neck bone was not broken and the cartilage around her neck was still intact, medical experts testified. Her official cause of death is undetermined.

In closing arguments Monday, prosecutor Peter Sapak concentrated on the evidence that does exist — Patterson spoke to his ex-girlfriend and sent text messages to his daughter that appeared to indicate a guilty conscience. The ex-girlfriend, Holly Graff, testified during the trial that Patterson admitted he choked Marquinez, though she couldn’t recall exactly how he phrased it. In text messages, Patterson said he “did something terrible” and was “really sorry.”

Most significantly, Sapak said, Patterson did not call police or paramedics. He called Graff, who put him in touch with Padowitz.

After consulting with Padowitz, Patterson’s attitude changed from contrition to “preservation,” Sapak said. He was recorded repeatedly telling Graff not to talk about the case and insisting that he could not go to jail.

Padowitz concentrated on the evidence that could not be presented at trial.

“They still don’t know how she died,” said Padowitz. While the medical evidence does not entirely exclude strangling, Padowitz said the testimony of the prosecution’s medical expert agreed with his own — strangling was not likely. But other possibilities could also not be ruled out, Padowitz said. Marquinez could have had a heart attack or a stroke, he said.

Padowitz downplayed the argument that was a centerpiece of his opening statement, that Marquinez may have choked to death while performing oral sex on Patterson. Defense medical expert Ronald Wright said such a death was consistent with the physical evidence, but he agreed with the prosecution’s expert, Iouri Boiko, who said it was unlikely because of what it would have involved. The victim would need to have her air supply cut off for at least 30 seconds before she passed out, then at least another two to three minutes before she died.

Even Padowitz admitted Monday that was not a reasonable theory for the jury to believe.

“That’s not the way she died,” Padowitz said. “But that’s the way Richard Patterson thought she died.”

The defense claims about what Patterson thought and why he didn’t call 911 were complicated by the fact that he did not testify. Without Padowitz’s assertions, there was no one to testify that Marquinez’s death was preceded by a sex act. There was also no testimony to suggest, as Padowitz did during opening statements, that Patterson failed to call for help because he was embarrassed and humiliated for Marquinez dying from oral sex.