But the decision for prosecutors may not be so clear-cut, said criminal defense attorney and former Broward homicide prosecutor Ken Padowitz. Whether to pursue a case against somebody already sentenced to death is a dilemma, said Padowitz, who is not involved in the case. 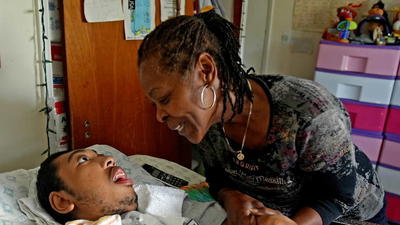 Ronnie Keith Williams has been convicted and sentenced to death for the murder of a pregnant woman 23 years ago. Now, prosecutors will review the possibility of new charges against him in the recent death of the victim’s son.

Two days after the fatal attack on her in 1993, Lisa Dyke’s baby was delivered. But Julius Dyke, who suffered brain damage, spent his whole life unable to walk or talk, and needed tubes to help him breathe and eat.

When Julius died earlier this month at 23, the medical examiner ruled his death a homicide. He died from delayed complications of cerebral palsy, with a contributory cause of “inflicted maternal trauma,” the Broward Medical Examiner’s Office said Thursday.

Of the possibility of new charges against Williams, who is already on death row, Broward State Attorney’s Office spokesman Ron Ishoy would say only, “We have the matter under review.”

Lisa Dyke’s brother, Theo Dyke of Fort Lauderdale, said the family wants Williams prosecuted for Julius’ death. “Because of Ronnie, Julius was in the condition he was in,” Theo Dyke said.

But the decision for prosecutors may not be so clear-cut, said criminal defense attorney and former Broward homicide prosecutor Ken Padowitz. Whether to pursue a case against somebody already sentenced to death is a dilemma, said Padowitz, who is not involved in the case.

On one hand, “this is what you have to balance: What is the cost to society, manpower in time, in taking attention away from their cases?”

Transferring Williams out of a secure state prison to be taken back into a Broward courtroom means making sure he doesn’t try to escape, Padowitz said. There is a “security risk for an individual on death row” who “would do anything to escape that predicament,” he said.

But on the other hand, there’s the issue of “justice for a child, a human being, a family,” Padowitz said. “If you violate the rules of law, people expect the government will prosecute … and mete out an appropriate sentence.

“I don’t know if there is a clear answer here.”

Williams attacked 18-year-old Lisashante “Lisa” Dyke on Jan. 26, 1993, when she was baby-sitting for a friend in Wilton Manors.

Police said Williams stabbed her repeatedly in her chest and back with a 15-inch knife, and bit her on her back, breasts and buttocks. They said Dyke identified Williams to a 911 operator and again on her hospital deathbed by pointing him out in a photo lineup. She died Feb. 14, 1993.

As Julius aged, he spent his days in bed in his grandmother’s house, under her eagle eye, often with the television on in the background.

His grandmother, Margaret Dyke, became his most fierce advocate and considered him an extension of her only daughter. “I feel like I’m taking my daughter home again,” she told the Sun Sentinel in March 1993 when she brought Julius home from the hospital.

In 2004, a Broward jury found Williams guilty of first-degree murder, rejecting his defense that he was too drunk on vodka and high on cocaine to have planned the attack.

The same jury recommended he receive the death penalty. He has remained on death row since.

David Jones, who is now retired, handled dozens of murder cases during his career at the Wilton Manors Police Department. But he said Lisa Dyke’s case, which he helped investigate, sticks out in his memory. “It was brutal, just brutal,” he said.

“He needs to be held accountable,” Jones said of Williams. “She was eight months pregnant. She would have delivered a nice healthy baby boy if not for him,” Jones said. “He had total disregard for her and her unborn child.”

Jones said he thinks prosecutors should pursue the new charges against Williams despite the cost.

“This is an unborn child who was damaged and spent his life not knowing he even existed; 23 years of brutality inflicted on him.”