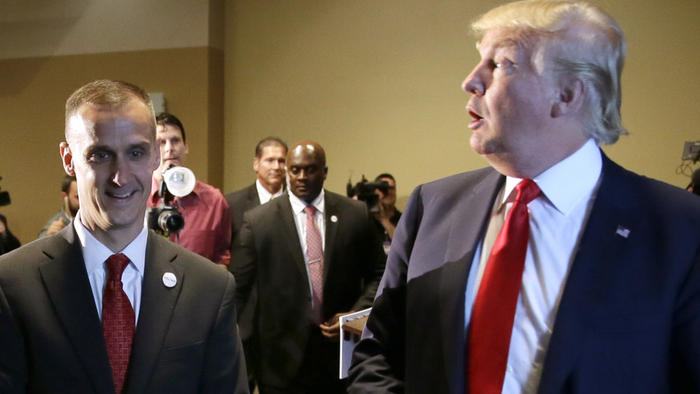 “Their job is not just to rubber-stamp police officers’ arrests, but to use their discretion in determining whether or not to charge people,” said Padowitz.

Palm Beach County prosecutors said Thursday they will not be filing a battery charge against Donald Trump campaign manager Corey Lewandowski because he may have believed he was protecting the Republican candidate from from a Breitbart news reporter after a March 8 news conference.

State Attorney David Aronberg said there was no doubt Lewandowski “pulled” reporter Michelle Fields back as she was trying to interview Trump, but added that the contact wasn’t enough to justify a criminal prosecution.

“The state has a responsibility to review cases submitted by law enforcement and determine whether or not there is a good-faith basis to proceed,” Aronberg said. “While the facts support the allegation that Mr. Lewandowski did grab Ms. Fields’ arm against her will, Mr. Lewandowski has a reasonable hypothesis of innocence.”

A widely cirulated video of the incident shows Fields trying to interview Trump and apparently getting close enough to make physical contact with him. “Mr. Trump appears to react to Ms. Fields by pulling his arm back and away from her,” Aronberg said.

“This reaction could have reasonably led Mr. Lewandowski… to legitimately believe that Ms. Fields was making unwanted physical contact with Mr. Trump, which caused Mr. Lewandowski to react by pulling her away,” he said.
Campaign staffers have some authority to “assist in clearing a safe pathway” and share in the “responsibility for the well-being of the candidate,” Aronberg said.

While police may have had a basis to find “probable cause” that Lewandowski broke the law, prosecutors use a higher standard when deciding whether to press charges, said Aronberg. “State prosecution relies upon a good-faith basis that sufficient evidence exists to prove a case beyond a reasonable doubt,” he said.

It was a standard prosecutors concluded they could not meet.

Aronberg’s decision was cheered by Lewandowski, according to a statement released by the Trump campaign.

Corey Lewandowski, Trump’s campaign manager, won’t face simple battery charge, report says
The campaign manager is “gratified by the decision to drop the misdemeanor charge and appreciates the thoughtful consideration by the Palm Beach State Attorney and his staff who carefully reviewed this matter, as well as Mr. Trump’s loyalty and the support of his colleagues and family during this time.”

Former Broward prosecutor Ken Padowitz, who agreed with Jupiter Police when they recommended a criminal charge on March 29, said Thursday that prosecutors also made the right call.

“Their job is not just to rubber-stamp police officers’ arrests, but to use their discretion in determining whether or not to charge people,” said Padowitz. “Circumstantial evidence is very strong for probable cause. This is where the chasm between ‘probable cause for an arrest’ and ‘likelihood of conviction beyond a reasonable doubt’ can be seen to its full extent.”

On her Twitter page, Fields expressed dismay that reporters learned about Aronberg’s decision before she did.

“Prosecutor’s office told me they would inform me of decision tomorrow,” she wrote Wednesday night. “If reports true, guess they decided to leak to reporters first. Ugly.”

She also said she would be content with an apology from Lewandowski. She has not posted Thursday.

Aronberg said he spoke with Fields before his news conference.

In his statement to reporters Thursday, Aronberg said his office considered an affidavit from a former FBI agent named Barton Brown, who explained that Secret Service agents form a “protective bubble” around candidates and that campaign staffers can play a role in that protection.

Aronberg also noted that a Secret Service agent standing directly behind Trump throughout the incident “appeared to show no concern over her [Fields’] actions. Mr. Lewandowski could have called this agent’s attention to her actions before taking action himself if he considered her a threat.”

Even after considering those factors, however, Aronberg said Lewandowski still had a credible claim of innocence based on the circumstances shown on the video.

Attorney Bradford Cohen, a member of Lewandowski’s defense team, said additional footage provided to Aronberg’s office showed Fields shortly before the incident being directed away from the area where she later approached the candidate.

“I think Aronberg made the right choice here,” said Cohen. “He’s an honorable guy and he did not let politics play a role in this.”

Aronberg is a Democrat and a vocal supporter of the Hillary Clinton campaign.

The decision not to prosecute Lewandowski came as no surprise to West Palm Beach criminal defense attorney Richard Tendler, who has been following the developments.

“That case was going absolutely nowhere,” Tendler said, calling it an easy decision despite all of the political undertones.

“The reality is that it was a crowded political event, and one of Lewandowski’s jobs is to keep people away from Donald Trump,” the attorney told the Sun Sentinel. “How does that rise to the likelihood of a successful prosecution? It does not.”