His attorney, Kenneth Padowitz, said, “The most important thing is justice. … My client, Michael Irvin, is innocent. He’s always been innocent and we are very, very, happy this process is concluded and Michael can go on with his life.” 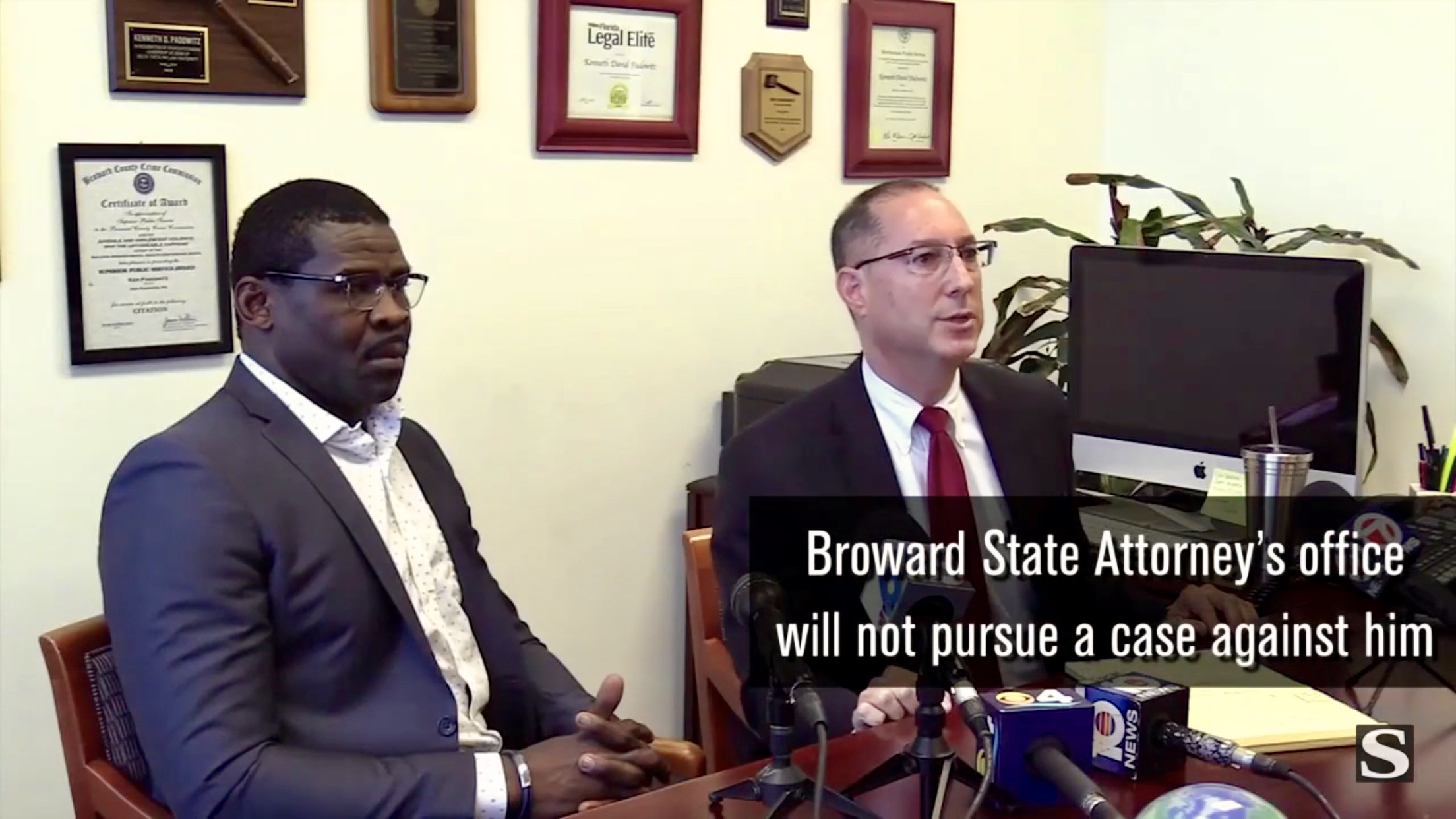 Attorney Ken Padowitz with Three Time Super Bowl Champion Michael Irvin at Press Conference where his name has been cleared by the State Attorney’s Office and FLPD Investigation.

“The case has been declined for lack of evidence and no likelihood of conviction,” a state attorney’s office spokesman said.

“Being accused of something like this, this is as devastating as it can be,” Irvin, 51, said during a news conference Monday at his Fort Lauderdale lawyer’s office.

“And I said all along that absolutely nothing happened,” Irvin said.

Prosecutors found that despite a review of police reports, video surveillance, phone calls, sworn statements, and toxicology and crime lab reports, “it is clear that there is not enough evidence to establish that a crime was committed,” a prosecutor’s report said.

There was no DNA evidence to establish that a sexual battery happened.

The former Miami Hurricane wide receiver described his accuser as a platonic friend of 10 years. The months-long investigation began after the woman accused Irvin of sexual assault.

Fort Lauderdale police in March confirmed that Irvin was being investigated, though he was not charged with any offense and was not arrested.

On March 21, the woman said she met Irvin at a bar, where she had two glasses of wine.

The woman then accompanied Irvin and friends to another bar, where she said she had two more drinks, according to a prosecutor’s report.

Irvin, the woman and a male friend went to Irvin’s room at the W Hotel at 401 N. Fort Lauderdale Beach Blvd. Irvin said he offered his suite to both the woman and male friend to sleep, because he had an early flight.

The male friend left the hotel. The woman told investigators she felt ill while there and believed something was put in her drink, the prosecutor’s report said.

The woman also told investigators she remembered Irvin having sex with her.

Blood and urine tests taken from the woman found the presence of Adderall, which she takes for attention deficit disorder, in addition to ecstasy, cocaine and alcohol, according to the prosecutor.

She did not have injuries that could be attributed to the incident, prosecutors said.

Attorney Gloria Allred was representing Irvin’s accuser. In an email Monday, Allred declined to respond to any questions or say whether she was still representing the woman.

The prosecutor cited the victim’s inability to recall details, inconsistent statements, drug and alcohol use and voluntarily entering and leaving the hotel with Irvin, and wrote that without additional evidence to corroborate the woman’s account, “we would not be able to prove beyond a reasonable doubt that a sexual battery occurred.”

Irvin said he was “in the forgiving business” and that his anger toward his accuser deflated when he learned of the toxicology report.

His attorney, Kenneth Padowitz, said, “The most important thing is justice. … My client, Michael Irvin, is innocent. He’s always been innocent and we are very, very, happy this process is concluded and Michael can go on with his life.”

An alanyst on the NFL Network before the case began, Irvin said the NFL stuck by him.

“They waited on this process and they didn’t necessarily have to do that,” Irvin said. “So I appreciate all that they have done. Those people that I work with, they waited through the process, they gave it time to work its way out and I want to thank them publicly for that.”

Irvin was a football star at St. Thomas and as a wide receiver for the University of Miami, he was part of the team that won the 1987 National Championship. With the Dallas Cowboys, he starred on teams that won three Super Bowls.