“Here we have an opportunity to maybe change this course of events.” 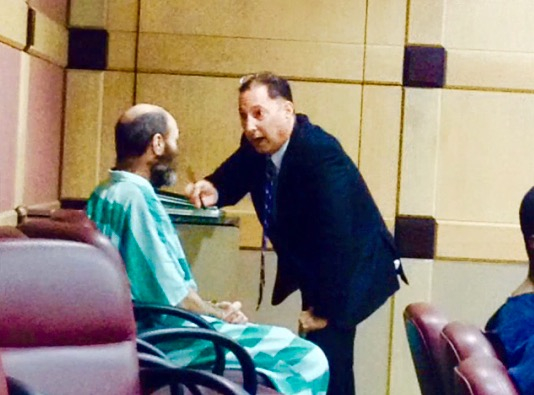 After decades of searching for him, his family found the 42-year-old homeless man — in the Broward County Jail.

“[It was] very emotional to see him handcuffed, but I’m very happy,” said a tearful Bertha Solorzano after attending her half-brother’s court appearance Wednesday morning.

The last time Perez’s father had seen him, it was 1973, when Perez Jr. was nine months old.

Perez Sr., who was married to a woman in Mexico, was working in Chicago at the time, where he had a child, Perez Jr., with another woman, whom the family knows as Irene Vivian Smith. Nine months later, she left with the infant, Perez Sr. said.

Jose Frederick Perez Jr., 42, is finally reunited with his family after disappearing with his mother as an infant

Perez Sr., now 73, went on to bring his wife to the U.S., where they would raise their growing family. He would never see his son Jose Jr. again.

Wearing a striped jail uniform and a big smile, Perez Jr. sat in court Wednesday and gave a thumbs up to his father and half-sister Solorzano, 48, who were in the gallery.

Perez Jr. had been sitting in a cell for more than eight months on charges of burglary and grand theft after breaking into a garage in search of food and taking a bicycle, according to attorney Ken Padowitz.

“Because of his prior criminal background, he’s facing going into that revolving door justice system of taxpayers paying to have him incarcerated in prison for years,” he said.

Jose Frederick Perez Jr., who disappeared with his mother as an infant, is finally reunited with family after 42 years.

“Here we have an opportunity to maybe change this course of events.”

Broward Judge Edward H. Merrigan reduced the $30,000 bond to $6,000 so Perez Jr. could be released from jail and fly with his half-sister and father to their Charlottesville, Va., home.

“We are not going to judge him,” Solorzano said. “We are going to help him.”

Two years after the younger Perez’s mother left with him, Perez Sr. was bringing his wife and growing family to America.

“After that, I mentioned to my wife and my daughter that I had another kid by somebody else,” he said. “In the beginning it was a little hard for my wife, but she accepted it.”

The family’s search for Jose Perez Jr. began years later. By then, Perez Sr. had another son and five daughters with his wife.

“I remember looking 15 years ago and I got really, really tired of looking and looking,” Solorzano said.

It wasn’t until recently that she got a single match on a people-finder website.

“We were surprised to hear he was in Florida,” she said. “We never even thought about him being in Florida.”

The family hired Padowitz to handle his case, gain his freedom, and set the stage for a family reunion that was 42 years in the making.

“He was thrilled that his family was here,” Padowitz said. “I think he really realized the opportunity he had before him.”

Perez Sr. said he has a room all made up and waiting for his long-lost son.

Perez Jr. will have to return to Broward to settle his case at some future date, but Padowitz said it’s a dream come true for his client.

“As much as someone can pinch themselves when one of their hands is handcuffed to a chair in the jury box of a Broward County courtroom, I think he was,” Padowitz said.